Individually, the silly, almost daily things we blame on the dog — Nobby did it — aren’t really worth mention: a china tea cup in the butter compartment; tiny potatoes tied up in a green newspaper bag and tucked in with the bread; Peter’s three nights in a row sleeping on the couch because he forgot to come to bed; him not only mowing the grass two days in a row, but three times in one day. All quickly forgotten by him, but I’m buried in what feels like wet sand.

Most Alzheimer’s caregivers know that “going with the flow” is often the best way to handle such things. But sooner or later, even the most patient of them — us — will blow a cork, a lid, a fuse, a gasket.

I am not a patient caregiver.

I’d sorted the edges of the 252-piece puzzle Carolynn brought to me, and put about half the frame together on the kitchen counter. The rest, I’d organized by colors on paper plates. Peter enjoys jigsaws and he’d placed several pieces while waiting for dinner one evening.

Next morning, I came downstairs, turned the coffeemaker on, filled Nobby’s bowls, sorted our daily rations of pills, then noticed — WHAT? — the puzzle had been cleared away, all the pieces were back in the box. The paper plates were stacked neatly, empty.

My lid hit the ceiling. I needed a new fuse. My gasket wanted replacing.

In the previous several weeks I’d warned, if he didn’t stop moving my “stuff,” I would wreck his towers of coins, even knowing that his need to organize helped him control his out-of-control brain. So that morning, sputtering like a kettle on the boil, I stomped down to his desk, took a deep breath, and raked my hands through his stacks of quarters. 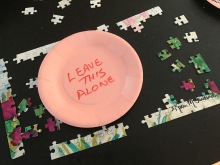 I was furious, childish beyond reason. How absolutely infantile of me! If Peter noticed at all, he never said, and I’m sure he was quite content to re-stack the coins and make order out of the chaos I’d caused. That evening, I sorted puzzle pieces once more and started putting it together again. To be safe, I wrote “LEAVE THIS ALONE” on a paper plate. 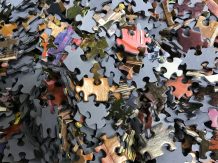 Thursday,  we browsed through a local thrift shop. From a table laden with jigsaw puzzles, Peter picked up a brilliantly colored 1500-piece one that would measure 33″ x 24″ when assembled. He debated buying it — too intricate, he wondered? In the end, he paid the 53 cents and brought it home. In the days since he has done little else but sort. By last evening, he had more than half of the outside in place, the rest of the edge pieces set aside, waiting.

Will I box the pieces up and put them away like he did to me? No.

Will I try to work the puzzle with him like we used to do? No. Togetherness is more than he can handle.

Will I slot a few pieces in when he’s not around? Darn right, I will.

Pretty French scene reminds me of our trip to Nice 12 years ago. Peter doesn’t remember, but I do.

Header: Kim McFarland painting of perplexed Westie with a ladybug on his nose.