Thirty-three years ago today, Peter and I married with my daughters, Carolynn and Leslie as our witnesses, and a fellow Ohio University grad, Reverend Timothy Behrendt, as the officiant. Just us, on a snowy upstate New York day. Friends contributed to the raucous party that followed.

Our marriage was a long time in the making — seven years from the magic night we met. A lot of urging by family and friends, extreme measures by me, and a final ultimatum finally convinced Peter. For the past several years, he hasn’t remembered the day at all. When we agreed upon easy-for-an-Englishman-to- remember Boxing Day, we didn’t reckon on dementia moving in.

I wrote the ceremony, and borrowed from several poems, little knowing how prophetic they would be:

You are here, Carolynn and Leslie, to witness and to celebrate the coming together of two separate lives, to join Peter and Judy in marriage, to be with them and rejoice with them in making this important commitment. The essence … is the taking of another person in his or her entirety as lover, companion, and friend. It is therefore a decision which is not to be entered into lightly, but rather undertaken with great consideration and respect for both the other person and oneself.

So today we acknowledge the decision that Peter and Judy have made to share their lives with each other and with you.

Sharing, not at the expense of each other’s individuality, rather sharing by enhancing your own uniqueness through the strength of a common bond. Marriage represents a mutual arrangement in which each is the guardian of the other’s solitude. To affirm the distance between each other is to affirm the dignity of friendship in which each helps the other to grow continually, to be different, and to be alone at times.

It is a sign of great strength, rather than weakness, to let other people be and not interfere with the choices they wish to make.

Very likely then, the “Highest type of sophistication is love, namely the ability to let that which is different exist and be itself. True, that means an inevitable loneliness —but the loneliness of love is far to be preferred to the togetherness of blandness and characterless-ness.

To experience one’s aloneness is to experience who one is. Real love is the ability to say “no” to everything that seeks to dilute love into a kind of togetherness and to protect us from our solitude, while violating the solitude of another.”

This year, again with son-in-law Bill’s guidance, Peter picked out a perfect anniversary card for me that read, in part, “Times change, life goes on, years go by …”

Well, ain’t that the truth?

All our lives together, forty years total, my husband has never done schmaltzy cards except for Christmas, our anniversary, and occasionally, my birthday. Now he has to be reminded several times over that those dates are coming up.

I, knowing he doesn’t like “sappy” sentimentality foisted on him, always buy a silly, jokey card. This year the cashier and I hiccuped with giggles at my choice: “Sometimes when we’re lying in bed, I look over at you and think, ‘I am so lucky…’ then you start snoring in that snorty way, and I think, ‘Well, that’s annoying, but I’m still lucky.'” 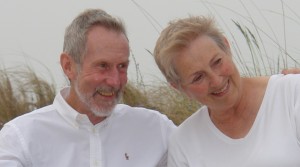