Peter clears the litter from the porch.

A nurse sat at the end of the hall when I approached my husband’s room yesterday. “Peter’s outside,” she said as she walked toward me. “He’s had a bad morning…very out of sorts….”

I held up the new broom I’d brought. “He was so thrilled to be able to sweep up grass the other day,” I said, “but he complained he needed a bigger broom. This ought to do it.” She nodded her head and said he’d told everyone that he got to sweep.

She added that she’d just given him his morning beer. I suggested tactfully that a cup of tea usually works better when he’s upset. “Beer with his lunch would be a better idea,” I said. She went off to change the orders—PBR with lunch, Guinness after dinner.

Outside, I saw him at the far end of the garden. When I yelled his name he looked up and laughed. “What are you doing here?” he asked, trotting in my direction. I brandished the new broom. “What’s that?” he  asked.

“You said you needed a bigger broom.” He grinned as if it were the best present ever. “This space really needs to be swept,” I said, as I nudged him toward the porch where we often sit.

Well, that’s all it took! He went right to work sweeping leaves and twigs off the cement and even whisking the seat cushions clean. He also managed to polish off his beer and the coffee I’d brought, before he tracked along the sidewalk with that bright red broom. He was in a much happier mood when I left for my dentist appointment, and so was I.

Cushions get a brush off too. 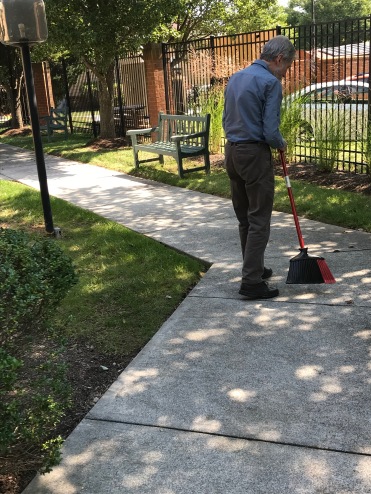 I love bittersweet except as it applies to our lives.

This morning I learned that Peter’s down mood had returned in the afternoon. Again he asked over and over why he was there? When I got home from the dentist, probably about the same time he had the second meltdown, I looked around at the mess “Florence” had made and wondered how I’d cope on my own without my champion sweeper and all that autumn brings. But my thoughts are selfish compared to those my husband is trying to sort out in his fractured mind.

Header: Bittersweet is lush this year.