A policeman stood at the door.”Afternoon, ma’m,” he said. “Does your husband walk a big white dog?” I nodded. “He’s had a fall. An ambulance is on the way.” I grabbed the door to hold myself up and he added quickly, “He’s all right, but they’ll take him to the hospital as a precaution.”

“Come in and lock the door behind you!” I yelled, while I ran to turn the stove off, grab my purse, and dash out the side door. “Your dog is OK, too,” he said as he followed me through the house. “He’s right beside your husband. Another policeman will bring him home.”

Peter had fallen — face-planted — into a shallow ditch less than a block from our house. It had rained all day, the ditch was running. I’d fastened his GPS watch around his wrist before he and Nobby left.  Minutes later, I saw that he’d taken the watch off, defying me as he does, and left it the kitchen. If a passer-by hadn’t seen him and called 911 I would have had no way to find him when he didn’t return. It could have been worse.

But “worse” was yet to come.

A second policeman — the same one, incidentally, who helped find Peter last summer when he got lost — took me to the ambulance. He was already on the gurney when I climbed in behind him. He turned his battered, muddy face toward me and said, “Uh oh, now I’m in trouble.” The EMTs laughed. He kept them entertained all the way to the hospital. 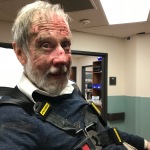 In the ER he kept up his joking to the amusement of the various people attending to him.  When two young female aides left the room, one said, “Oh, he’s so cute!”

His right hand suffered the worst physical damage — a wide, deep gash required stitches to hold his tissue-like skin together. Numerous other bumps and abrasions punctuated his upper body and knees, including a goose egg and black eye that bloomed later. As I gathered up his bloodied, muddied clothes he said, “S’OK, those will come clean.” Nuh unh, I thought. Not enough Oxy-Clean in the world to get that out.

Peter’s hands and face had been cleaned up by the time the ER doc returned to stitch his hand. “Oh, you’re quite handsome under all that dirt,” she said.

He grinned. “I’ll have to do it again then.”

Turns out, those few hours in the ER were the easiest of the next two weeks. He was understandably confused that Sunday evening, but the next day he awoke a different person. In the next few days he aged ten years.

From the start he remembered nothing about his fall, not that he would, and his few previous memories were erased too. He insisted all along that he didn’t hurt anywhere, though he must have, but his gait was stiff, and he shuffled as if he’d suddenly developed Parkinson’s. He struggled mightily to get out of his chair, even with a cane. He refused my help angrily, viciously, so unlike the man I married. He became argumentative and unreasonable in ways that he’s never been. He had no appetite, strange for him, and he slept soundly twelve or more hours a night. “I’ve nothing else to do,” he said. The Olympics’ coverage saved us.

Help dressing or undressing? “NO, I don’t need you.” Yet it took him twenty minutes to pull one sock off, and forty minutes, with my unwanted assistance, to get up the stairs to bed.

A physical therapist will assess him soon, there’ll be additional lab work to rule out other issues — the urine-analysis showed no UTI so the “hope” that spurred is gone. I may hire additional help, or may go to a nursing home solution. In the meantime, our sons-in-law have made the downstairs more accessible. Moving a bed down is a possibility.

Peter went from being a whisker shy of his eightieth birthday 18 days ago, to looking and acting as if he were ninety.

Still, not all news is bad news. Between the time of my previous post and now, he turned a corner. His dogged determination and bloody stubbornness, that usually makes me tear my hair, has instead helped him rally. He’s not back to where he was before, and never will be, but he’s so much better. But then, anything would be an improvement from the blood, rain and mud drenched man the ambulance crew hauled out of that ditch on February 11. 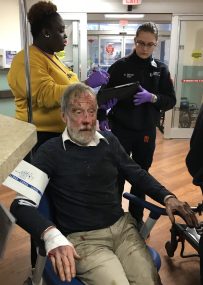 Header photo: In the ambulance, Peter regaled the EMTs with his patter . From the back, he looks unscathed.

14 thoughts on “The second worst day of my life so far.”