Lately, my husband’s downhill run has gotten steeper, faster. When we used to bicycle together, we both preferred climbing hills to zooming down them. The  inherent thrill of a downhill scared both of us. That’s still true, though neither of us bikes anymore, and we don’t really talk about his descent. I can’t imagine how difficult it is for him although he still uses his “braking” mechanism: corny jokes and silly laughs.

We eked out a chuckle the other day. The doorbell rang. As usual Peter wouldn’t answer it though he made sure I’d heard it. A young man stood on the step holding a gorgeous bouquet. A bright beautiful cheery surprise after a trying few weeks.

Peter was working on the daily sudoku. I walked in holding the flowers. When he looked up his eyes popped, his mouth fell open, and the ruddy color drained from his cheeks. He glanced quickly at the date at the top of the newspaper page. “November,” he said. “That’s not you…is it?”

“No-o,” I laughed, “for me, from Carolynn and Robin. November is ‘Caregivers’ Month,'” I said. He didn’t question that. He doesn’t recognize that I’m his caregiver, and insists he doesn’t need one.

I put the flowers on the kitchen table. At dinner that evening he studied them. “Have those been there all along? You know, for months and months?”

“No, they came this morning.”

Minutes later he asked again, then again, and again. 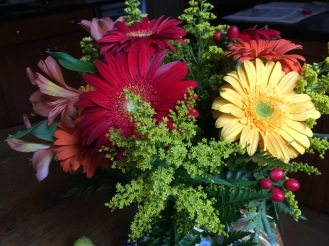