Sir John Suckling invented cribbage in early 1600s England. The game, still popular in pubs, is played with one deck of cards, a cribbage board and colored pegs with which to keep score.

Cribbage is somewhat complicated, but even more than the game itself, the odd terms and conventions confuse beginners. This isn’t surprising considering that the country of origin gives its villages such whimsical names as Pucklechurch, Nether Wallop and Great Snoring. Cribbage terms—his Nob, box, the crib, right Jack and Muggins—confuse as well.  A Muggins, for example, is called when a player doesn’t calculate her score correctly— the difference in points is awarded to the opponent. Good thing for me we’ve never followed that rule.

Peter and I used to play a lot of cribbage. He teased relentlessly when I forgot whose turn it was to play after a “go” or whose turn to cut the cards or, for that matter, even to remember when to cut the cards. In my never ending attempt to keep him engaged now, I wondered if he would try to play again. He surprised me.

Without going further into the myriad details and quirks of the game—this isn’t meant to instruct after all—I’ll just say that Peter plays way better than I thought he would. He remembers to offer the dealer, me, a chance cut the deck and to cut for the “turn-up,” while I remember which direction to p

eg. He never remembers which color is his and often—on purpose I’m sure—moves my red peg ahead if he and his blue peg are behind.

At first he didn’t seem to remember that a hand with four ten-count cards, a five, and a five turned up was an “even ‘doz,” his words for 12 points. But when I used the phrase I saw the tiniest spark in his eyes that said, oh-h, yes…even ‘doz…

When I forget to add extra points for a hand that is all the same suit (four) or that also matches the turn up suit (five) Peter reminds me with a sly look. I never have been able to remember that when “his Nob” is turned up the dealer gets two points.

He’s remembered the custom to knock sharply on the table to signal either that he can’t play or doesn’t want to cut. Another niggly convention I seldom recall.

It has worked out that whenever we play one of us remembers what the other forgets. Peg two points for the pair we are!

One day I suggested we play Rummy for a change. Nearly every hand, Peter forgot he needed to lay down at least a run of three or three of a kind. It confuses him when I remind him that he can draw from the discard pile if he wants a certain card and is able to play it with something in his hand. I’d just discarded a queen when he asked, “Can I pick that Queen up?”

“Yes, but you have to play her with at least two other Queens, or the King and Jack of hearts.”

He studied his hand then, with a flourish, spread four Queens and three tens across the table.  “OUT!” he said.

I sputtered. “You fooled me again, you cheeky bugger.”

He loves to make me laugh and I love that he still tries. 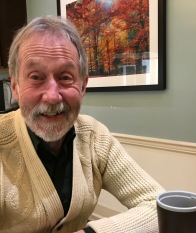 Peter giddy that he tricked me.

He knows what it takes to win after all.

Header: Peter and Nobby are featured on cards we use.