We were salmon swimming upstream into a pack of grizzly bears. Two Fridays before Christmas, and we were at the largest mall around. What was I thinking? 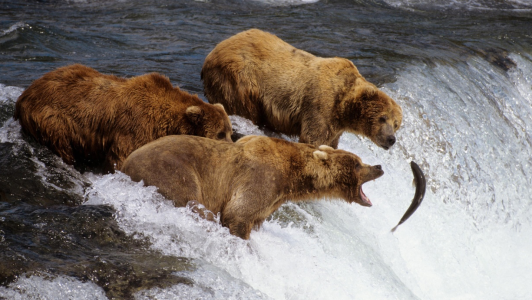 I don’t like to shop anyway, especially not for something specific.

“Specific” was shoes for Peter. He complains he has no shoes every time we get ready to go out. The man has shoes, lots of shoes. He just doesn’t want to wear them.

Right away I found the perfect pair. Nevertheless, he had to try on every likely shoe in the store before he realized — or would admit — I was right. He liked them so much he put his old ones in the bag and walked off, though not before the salesclerk chased him down to scan the code off the sole.

The real reason for braving the holiday hubbub was to see the Leonard Bearstein Animatronic Orchestra that performs at Christmastime. Peter takes childish delight in them, plus it’s fun to watch him watch the children who are alternately thrilled and terrified by bears not much bigger than themselves.

We elbowed our way around both levels of the mall, dodged moms pushing strollers the size of SUVs, teenagers meandering with cell phones in hand (why weren’t they in school?), and old guys tottering towards benches to rest.

It wasn’t long before I’d had enough. “One more stop,” I said, as we headed back to Macy’s and our exit to the parking lot. “I need underwear,” I told Peter.

“Yes, underwear…panties…knickers!” I pointed towards the lingerie department. The displays were an avalanche waiting to happen. Brassieres as far as my eyes could see. Peter said he’d wait by the door.

I edged through the racks. There were robes and slippers and nightgowns aplenty, but I didn’t need nightwear either, damnit, I needed underwear and there was none in sight. I had no energy for an extensive search.

Totally disgruntled — and, dare I say, hungry as a bear? — I headed towards Peter and the out-of-doors. “What’s wrong?” he asked.

“There weren’t any! No knickers! Only bras!”

Only an engineer would come up with a practical solution to vital, yet flimsy, womanly merchandise. The thought of women buying bra/panty sets, as if a “set” size would fit the whole woman, made me envision marketing nightmares: 34A up top meets size 18 XXL at bottom, or 44DDDD meets size 6.

“And you don’t even have a fur coat,” he said. His eyes crinkled merrily.

I looked at him with question mark eyebrows.

“Fur coat and no knickers…” he said, using one of his favorite English expressions. Such a comedian.

“You’re unbearable,” I growled. He laughed.

A man and his dog.

Orange is the new faded blue.